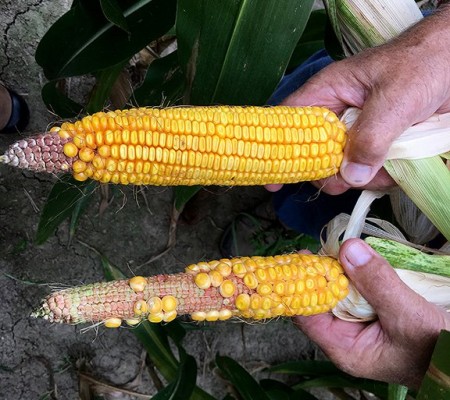 This post is from our partners at PRIDE Seeds.

In this photo, the cob on the bottom shows the obvious impact of a boron deficiency.

In late August, PRIDE Seeds agronomist Drew Thompson was called to visit a grower’s corn field where the complaint was ears that were small, misshapen and poorly pollinated.

The grower was frustrated, but also confused as the same seed had been planted into another field, a few concessions away with a different soil and crop history, but the same fertility and agronomic program.

“The other field looked just great,” said Thompson, with near perfect pollination and big, boast-worthy cobs. “What was going on,” he wondered.

A tour of the field with the disappointing ears demonstrated that not all the plants were affected, and plants with impressive cobs were mixed in with the poor.

The field itself was quite uniform, silt to silty clay loam, with a few tougher knolls.

Thompson observed that the knolls had more of the misshapen cobs, but some good cobs were also mixed in.

“No nutrient deficiencies were apparent (no firing or discolouration) so out came the shovel,” he said. Digging up plants with good and poor cobs revealed a uniform seed placement of two inches, and all plants had roots growing out at a near perfect 35-degree angle. Again, Thompson wondered, what was going on?

Closer examination of the plants with the misshapen ears revealed that they were typically shorter, thinner stalked and had smaller tassels. Upon inspection of the tassels Thompson was surprised to see that quite a few of the glumes had not opened and no anthers had emerged. The kernels of the poor plants were also quite a bit less mature than those on the good plants.

What was going on?

Reading through the scientific literature on what might cause misshapen ears on shorter, thin-stalked plants with small tassels that didn’t fully release pollen provided a potential answer – boron.

Boron is a micronutrient that plays a role in cell growth and development and is especially crucial for the development of the ears and tassel (boron is needed at the growing points, meristems, where the reproductive components of the plant form).

Thompson returned to the field to pull tissues samples, of both good and poor plants, and sent them off to the lab for analysis.  Between the good and poor plants most nutrient levels were very close, but the plants with poor ears had only eight per cent the level of boron that the plants with properly developed ears had, and the boron levels of the good plants were lower than ideal, according to the lab report.

“We were finally starting to see what was going on,” said Thompson. As seen in the photo below, the tassel on the right has been drastically affected by the boron deficiency.

Most of the boron in agricultural fields is found within the minerals that make up the inorganic fraction of the soil. As the soil minerals break down, the boron is released, where it can be temporarily held by the soil organic matter or, due to its highly mobile nature, can be taken up by plants or lost via leaching.

The field with the misshapen ears had been planted late and was still quite small when the area experienced a stretch of hot, dry weather (late June to late July). As well, the knolls within the field were slightly eroded, with lower organic matter levels.

Pulling all the information together, Thompson believes that the crop was forming its reproductive components during the hot, dry period and the limited moisture meant the plants couldn’t acquire sufficient levels of boron. “The issue was worse on the knolls with lower organic matter, less moisture holding capacity and less available boron,” he said. “Without adequate boron the plants were unable to properly develop either the tassels or ears.”

No such issues had been reported in this field before, although yields were typically lower as it is further from the home livestock-based farm and it didn’t see manure or hay. And, while the lack of livestock influence may be a reason for the lower yields, Thompson believes that limited boron will be a reason for reduced yield this season.

Under ideal conditions, most of Ontario’s soils are likely to be able to supply adequate boron for corn production, with the exception of very coarse or low organic matter soils. However, as boron is such a mobile nutrient it is hard to accurately measure soil levels by soil sampling, beyond a ‘point in time’ measurement, so it is very hard to gauge a soil’s response to boron.

“As well, during any given growing season we are likely to experience periods of sub-optimal conditions, which may make even soils with decent boron levels temporarily deficient,” says Thompson.

Given the eye-opening shock of what can happen to a corn crop with sub-optimal boron levels and accepting the fact that hot and dry spells are getting longer and more frequent in Ontario, Thompson believes we need to better understand how to work this nutrient into our fertility programs.