It has been great to see the combines rolling after a challenging start to the season in the eastern part of Western Canada, where crops were planted late, ultimately delaying harvest. Temperatures have also been dipping below 0°C at night, indicating that frost may have affected the later seeded or later season (corn & soybean) crops.

Corn is one of those late season crops, so what should we expect if it received frost before it was physiologically mature?

First off, we need to understand how hard of a frost our corn received. There will be a large difference between a “simple frost” that just damages or kills some of the leaves vs. a “killing frost” that completely stops the photosynthesis of the plant. A simple frost can occur when temperatures are around 0°C with optimum conditions for heat loss from leaves (clear skies, low humidity, no wind, etc.). Losses will be less during a simple frost because the surviving stalk can remobilize carbohydrates from stalk tissue to the developing ear, even if the leaves are dead. A killing frost occurs when temperatures are near 0°C for a few hours or when temperatures are -2°C for just a few minutes. Following a killing frost, photosynthesis and metabolic activities will completely stop, resulting in no further dry matter accumulation. This in turn, affects the yield and quality of the corn crop.

Next, we need to determine what growth stage the corn was at during the frost. Simply, the further developed the corn is, the less potential damage results. Once it reaches R6 (black layer), the milk line will be gone, and all kernels will have reached maximum dry matter. Meaning grain yield and test weight is safe from any frost.

The chart below shows how much yield loss can be expected due to a simple or killing frost based on the corn maturity:

Frost can affect grain quality as well as yield, more severe impacts on grain quality will occur at mid- dough (R4.5), while less negative impact occurs the closer the plant gets to dent stage (R5). By the time the kernel reaches ½ milk line there will only be relatively minor impacts on quality. 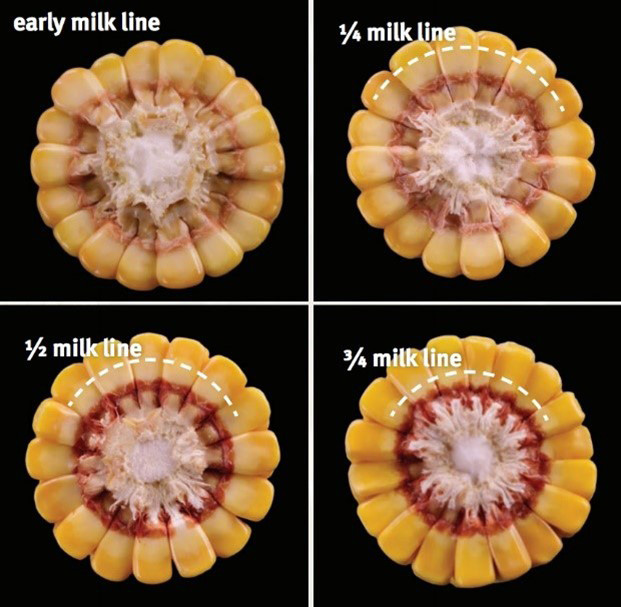 What to look for?

If you think that you had frost overnight, do not panic and run out to check fields. Symptoms of frost damage will only start to show up about 1 to 2 days after a frost. It is recommended to wait 5 – 7 days before assessing your crop. The symptoms to look for are water-soaked leaves that eventually turn brown.