Once corn plants have entered the reproductive phase of growth, the plant has reached is maximum height and is now focusing on grain development. Remember that ear girth (number of rows) and ear length (number of kernels per row) has been determined by environmental and management conditions during the vegetative stage, so the main objective during the reproductive stage is maximizing kernel fill.

Silking is the first growth stage, immediately following tassel emergence. To understand the importance of R1, it is important to know how pollination works – here is a quick summary:

During R1, the plant is extremely sensitive to stress. Extreme heat and drought can cause silks to dry out quickly and poor pollen viability resulting in poor pollination leading to less kernels per ear.

During R2, kernels are accumulating starch and appear white with a clear fluid. Silks are turning brown and rapidly drying out following fertilization. Resources from the leaves are beginning to be relocated to the developing ear.

At R3, kernels are yellow with a white, milky filling due to starch accumulation in the kernel. Good plant health and active photosynthesis during R3, sustains potential for kernels to have good size and test weight. Once again, rapid grain fill is occurring during the stage. Kernels that have aborted or failed to be fertilized will be apparent at this stage and the number of kernels per ear number is set for the most part. Stress during the following stages may reduce carbohydrate accumulate.

During R4, the white milky kernel filling is becoming thicker and pasty as kernels continue to accumulate starch. Kernels are gaining consistency and size and the outer edges of the kernel are becoming firm. At the end of the R4 stage a few dents may appear in the kernel crown. A killing frost during R4 may cause 25-40% yield loss. The cob has now developed its red-pinkish colour.

Silage Side Note: Optimal silage harvest is usually the later half of the R5 stage – R5.5 – R5.8 depending on the hybrid and conditions. At R5.5 the milk line is approx. 50% compared to R5.8 where the milk line is closer to 75% of the way to the kernel base. Harvesting when whole plant moisture is approx. 65% (35% dry matter) allows for greater success for packing, ensiling and storage.

R6 has been reached once the kernel has filled with starch and a black layer has formed at the base of the kernel. Once the black layer has developed, kernels have achieved maximum dry weight. Kernel moistures will range between 30-35%. Moisture loss from kernels will continue to allow for suitable harvest threshing and lower kernel moistures. Severe stress at R6 will have little impact on grain yield but can affect stalk integrity and harvest ease. 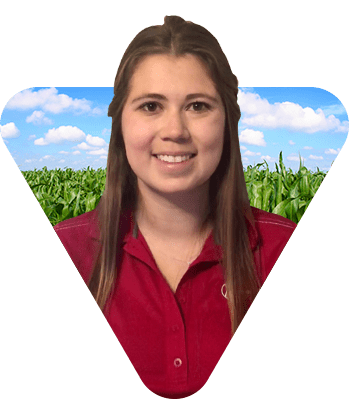