There is an unbelievable amount of research, technology, and fascinating science that goes into the process of developing and producing canola varieties. After spending an hour talking hybrid production with our resident expert Duane, I could likely do an entire blog mini-series, (that after about 3 episodes would surely be cancelled) but here are some of the most important things to know about the differences between Open Pollinated and Hybrid Varieties.

In its simplest form, the difference is this: An open pollinated variety starts as a single variety that is self-pollinated through each generation of seed production. A hybrid canola variety however, is the product of two unique parental lines.

One of these two lines has been bred to be male sterile (this is the female parent), which means that it cannot pollinate effectively, it can only be a receiver of pollen, and the other of these lines, the male parent line, pollinates as normal. The two parent lines are planted in separate strips, with the female strips being 2 or 3 times the width of the male strips. Honeybee hives are placed next to the field, to aid in the distribution of pollen. In some cases leafcutter bee shelters will also be placed next to the male strips (as seen in the photo below). Sometimes the male strips will also be clipped back to keep them producing pollen for the females as long as possible. 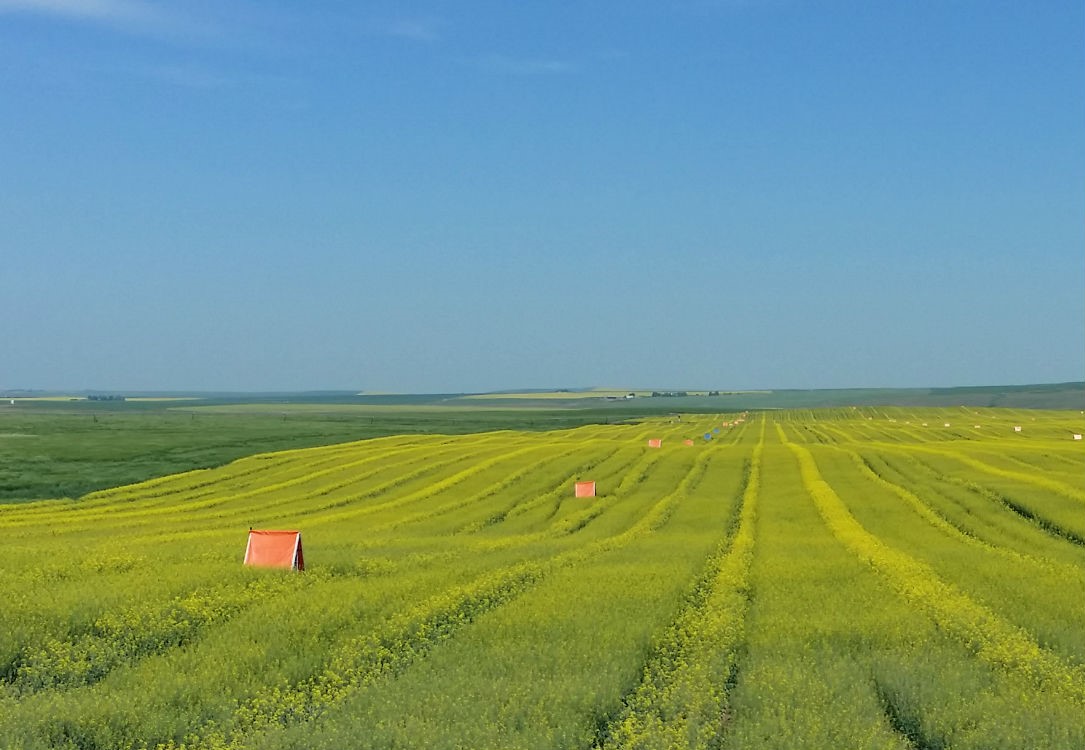 Once all of the pollinating is done, the male strips are mowed down, as they have self-pollinated (and will not produce hybrid seed), and the female strips will be harvested. These female plants have only received cross pollination from the males, which means that they will produce seed that is a pure hybrid of the two parent lines.

Why go to all this energy to produce seed when an open pollinated variety can be grown and harvested so simply? The answer to that is heterosis, also called hybrid vigour. The combination of multiple parent lines results in a faster, more aggressive plant, with a better stand and vigour, a better yield, and better response to inputs. The exceptional yield potential of hybrid canola is more than enough to justify the increased cost of the production, and when you combine that with the increased control (and number of potential varietal crosses) gained in the breeding process from combining specific parents, it allows breeders to find better varieties, and more easily breed in traits such as disease resistances.

This doesn’t mean that there are no advantages to an open pollinated variety however, and some open pollinated varieties are still grown. Open pollinated varieties require less inputs to get the most out of their genetics, and the simpler production process means that the cost of seed is less for the grower. In situations where you aren’t able to use the inputs to make the most out of your hybrid’s potential, or perhaps you are worried about doing so on a field that is already late or won’t have ideal conditions (maybe it’s so wet you’ve had to broadcast your seed onto the field) an open pollinated variety can make a lot of sense. It still has the potential to provide a good yield from your field, and the lower cost of seed and inputs can provide exceptional value under less than ideal circumstances. When it comes to a full fertility package and a good planting season however, hybrids are in a league of their own.

It’s all about the right variety for the job.