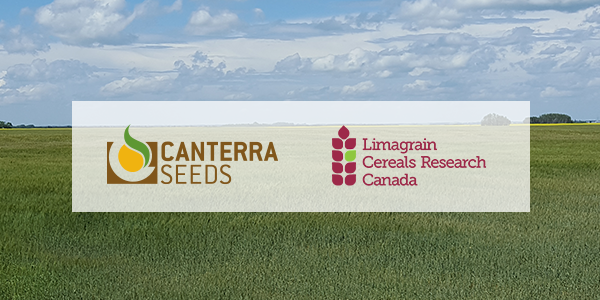 March 5, 2019 – Winnipeg, MB – CANTERRA SEEDS and Limagrain announced today that Limagrain Cereals Research Canada (LCRC) has received support from the Prairie Grain Development Committee to register its first two new wheat varieties. The support for registration of these two new varieties is a milestone for LCRC and marks an important day for Canadian wheat breeding.

“We are thrilled to see these two new varieties supported for registration,” said David Hansen, President and CEO of CANTERRA SEEDS. “This is a watershed moment for LCRC as it focuses on developing new milling wheat varieties that will deliver value to western Canadian farmers. The best from this program is yet to come.”

CANTERRA SEEDS is the exclusive commercialization partner for these two varieties and will have first right of refusal on all future varieties produced by LCRC. Branding and naming for each respective variety will be announced in the near future. Grain classification will be confirmed by the Canadian Grain Commission in the coming weeks.

“The registration of these varieties will be proof that our investment in Canadian wheat breeding is working,” said Tatiana Henry, CEO of Limagrain Cereals Research Canada. “We are proud of this partnership and look forward to working with partners throughout the value chain as these varieties move toward commercialization."

Now in its 4th year of operation, LCRC is focused on providing Canadian farmers improved wheat varieties by accessing superior germplasm, technology and plant breeding knowledge from around the world. LCRC is the first facility of its kind in Canada, and is proof of CANTERRA SEEDS and Limagrain’s long-term commitment to growing Canada’s agriculture industry.

CANTERRA SEEDS seed growers and farmers can expect to hear more about these new varieties in the coming months as CANTERRA SEEDS allocates stock seed for multiplication in 2019, with the aim of a limited-scale commercial launch by 2020. In the meantime, growers are encouraged to learn more by speaking with their local CANTERRA SEEDS representative.

CANTERRA SEEDS believes farmers deserve the best. Our diverse portfolio of top-quality field crop seed is cultivated with local investments in plant breeding, access to a global network of germplasm and traits, and a commitment to seed that goes back to our roots as a grower-owned company. Owned by western Canadian seed growers and agricultural retailers, Limagrain, Ceres Global Ag and private investors, CANTERRA SEEDS is committed to sourcing genetically superior seed products that deliver agronomic and economic benefits for producers, while also meeting end-user needs. With strategic partnerships around the world, we are proud to produce a versatile portfolio of cereals, pulses and oilseeds designed for success in Western Canada.

In 2015, CANTERRA SEEDS and Limagrain came together as strategic partners to form Limagrain Cereals Research Canada (LCRC), a cereal seed breeding company based in Saskatoon. LCRC is a rapidly growing Canadian company, passionate about using its plant breeding expertise to support the Canadian grains industry. LCRC brings together global germplasm, technology and plant breeding knowledge, with deep market awareness and access, to deliver value to western Canadian growers and their customers.