We’ve had a dry year in a lot of the Prairies this year. The main durum growing areas of Saskatchewan and Alberta are no exception. So, it is not surprising that in a recent poll, growers named their number one durum concern to be too much/too little moisture.

Are all Varieties Affected by Moisture in the Same Way?

We all know that the amount of moisture received in a year can greatly impact a crop, but what’s tougher to detect is if all varieties are affected in the same way.

In the typical durum growing regions for the province, drought conditions or lack of moisture are definite concerns. However, in 2015 we had an abnormally wet year.

If we take a look at the yield results in the 2016 SK Seed Guide, we see the following: 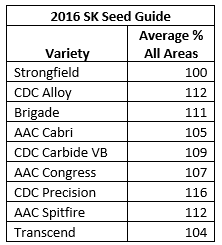 However, when we look at 2018 Guide, where we returned to normally drier levels, the results tell a different story. The yields as a % of Strongfield for many of the previous top performers have started to drop. Also note that the averages are cumulative, meaning they show the average % yield for all the years previously tested. 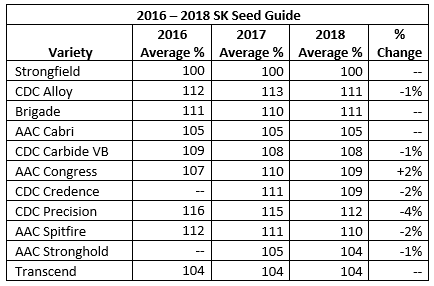 Interestingly, the yield % for AAC Congress durum has increased over the three-year period, suggesting AAC Congress does better in low moisture years compared to other genetics.

Another way to potentially look at the effect of moisture on a variety is to compare the results for Area 1 & 2, which is typically drier, and Area 3 & 4, which usually experiences more precipitation. A large swing in yield % could suggest the variety performs differently under wet and dry conditions. 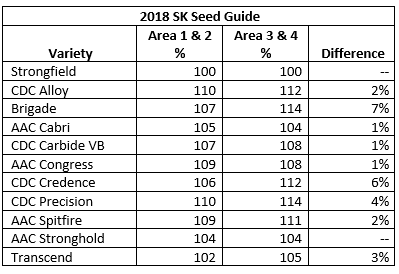 The largest swings in % are seen in Brigade and CDC Credence, while AAC Cabri, CDC Carbide and AAC Congress show the smallest difference.

Look at Data for Your Area

The SK Seed Guide publishes data by Area, combining Area 1 & 2 further to the south and west, and Area 3 & 4 in the north and east. A map of the areas can be found here.

It’s important for durum growers to pay attention to the area data when referencing the seed guide. Area 1 & 2 is the typical durum growing region, and while there is value in referencing the data for Area 3 & 4, growers should be wary of basing decisions on this area data alone. Don’t just scan the chart for the highest yield number and pick that variety! Take a closer look at the data for your own area – how should you expect a variety to perform in a typical year on your farm? 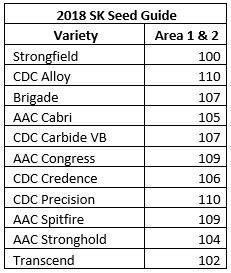 Here the highest yielding varieties are CDC Alloy, AAC Precision at 110% followed closely by AAC Congress and AAC Spitfire at 109%. It will be interesting to see what the 2019 guide shows after another dry year across the durum growing regions of Saskatchewan.

Talk to Other Farmers and Seed Growers

At the end of the day, seed guide information can be valuable, but it can never tell you the whole story. A great way to know how a durum variety will perform in your area, and under varying moisture conditions, is to talk to other farmers and seed growers.

As our customers are entering their combines and taking AAC Congress off the field, we’ve had an early yield report from one of them in Southwest Saskatchewan.

On this field he only received ½” of rain this year. After just combining his AAC Congress he reported a yield of 29 bu/acre. This is a very positive result in such a dry, dry field and the seed grower is very happy!

We’ll keep posting testimonials and yield results as they come in. Check back here.

A list of CANTERRA SEEDS durum growers can be found here.