One of our newer malting barley releases that has gained great popularity with farmers and end-users alike in recent years is AAC Connect 2-row malting barley, which is once again listed as “Growing Demand” on the Canadian Malting Barley Technical Centre (CMBTC)’s 2021-22 Recommended Malting Barley Varieties Listing.

Our team is proud to see the continued success of AAC Connect over the years. It has a combination of strong disease resistance to fusarium head blight (FHB) and excellent malt quality attributes that meets the needs of farmers and industry.

Peter Watts is the managing director of the CMBTC, overseeing all general operations. Watts has been in the agriculture industry for over 20 years. He started with the Canadian Wheat Board, then held various positions until joining the CMBTC. Watts and the team at the CMBTC have been great partners to us as we worked to bring AAC Connect into the marketplace.

How does AAC Connect fit in the Canadian and international malting and brewing industries? 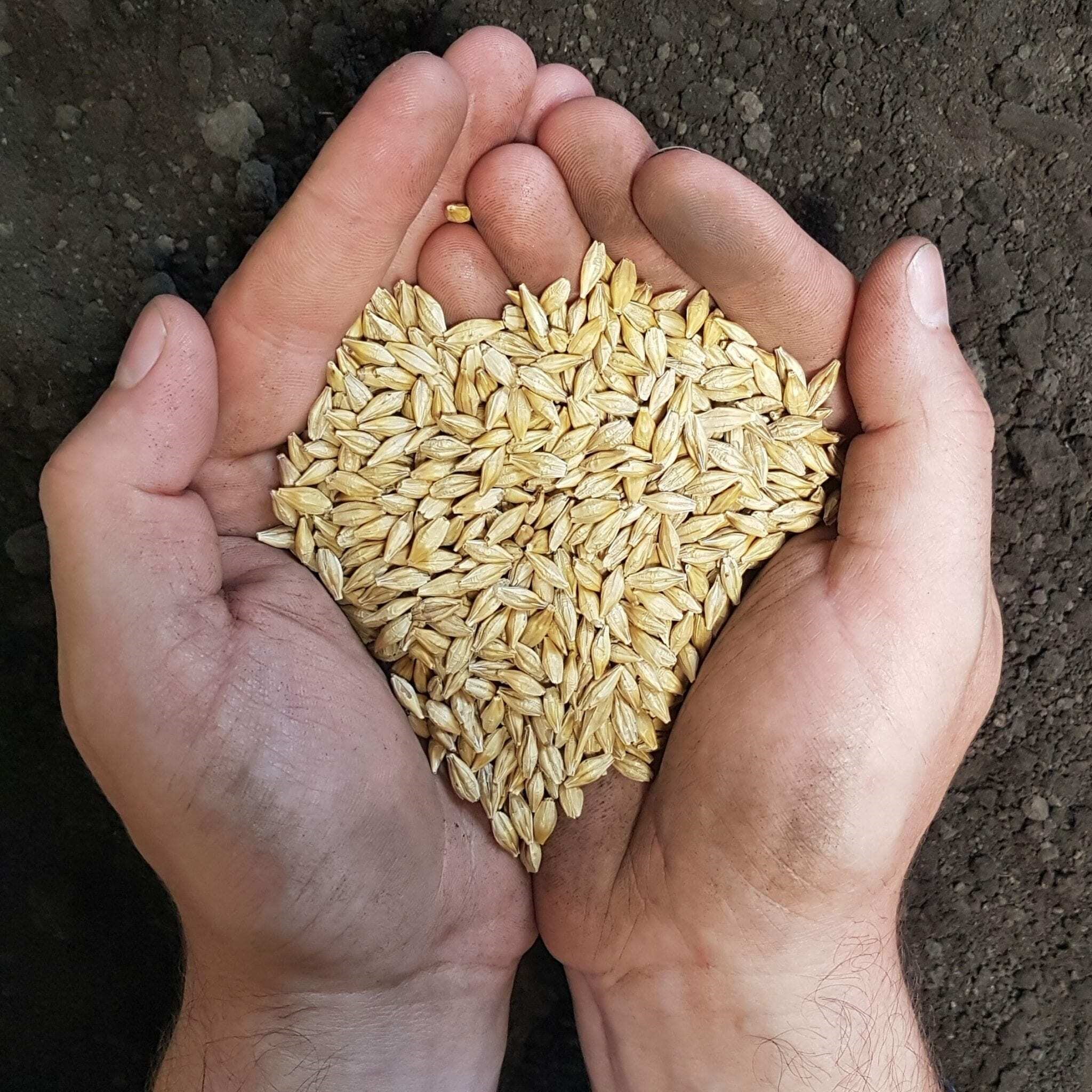 “AAC Connect is an interesting variety because it can be used in both the craft and macro brewing industries,” says Watts. “Most macro breweries are brewing with a combination of malt barley and other sources of starch and sugar like rice and corn, so they like a malt barley variety with higher protein and enzyme capacity, both qualities which AAC Connect possesses.”

He lists AC Metcalfe as a popular variety that fits those needs for macro brewing, but it is not suitable for craft brewers who are using 100 per cent barley malt. AAC Connect is an interesting variety that can straddle both marketplaces, giving good marketing options to farmers.

The Importance of Extract Levels in Malt Barley

Watts stresses that a barley’s extract level is one of the first attributes malting and brewing companies look at in a new variety; this is because the extract is what ultimately makes the alcohol content in beer. AAC Connect has really plump and uniform kernels. Plumpness and uniformity tend to be correlated to high extract levels and good processing performance.

“These are all very complementary qualities,” says Watts.

For the past three years, AAC Connect has been listed as “Growing Demand” on the CMBTC’s Recommended Variety list, and it secures that spot again on the 2021-2022 list.

What is the Purpose of the annual CMBTC Recommended Malting Barley Variety List?

There are already many malting varieties registered in Canada, but only a limited number of them are being used widely at a commercial scale.

Recommendations on the list are made based on trials the CMBTC conducts to assess the malting and brewing performance. Watts says varieties must test well to make it on to the list, and that they also take on-farm performance into consideration as well.

The CMBTC Recommended List contains two levels of market comments for its recommended varieties: “Established Demand” and “Growing Demand.” Newer varieties developed in Western Canada are typically tested first in research facilities like the CMBTC and the Canadian Grain Commission. The labs then send two-to-five kilo samples of the variety to Canadian malting and brewing companies. Next, they will provide samples of new varieties to our customers in other countries. If the maltsters and brewers like what they see and ramp up production trials, varieties will graduate to Growing Demand, and in mature years, Established Demand.

Support for AAC Connect from Canadian Farmers, Maltsters and Brewers 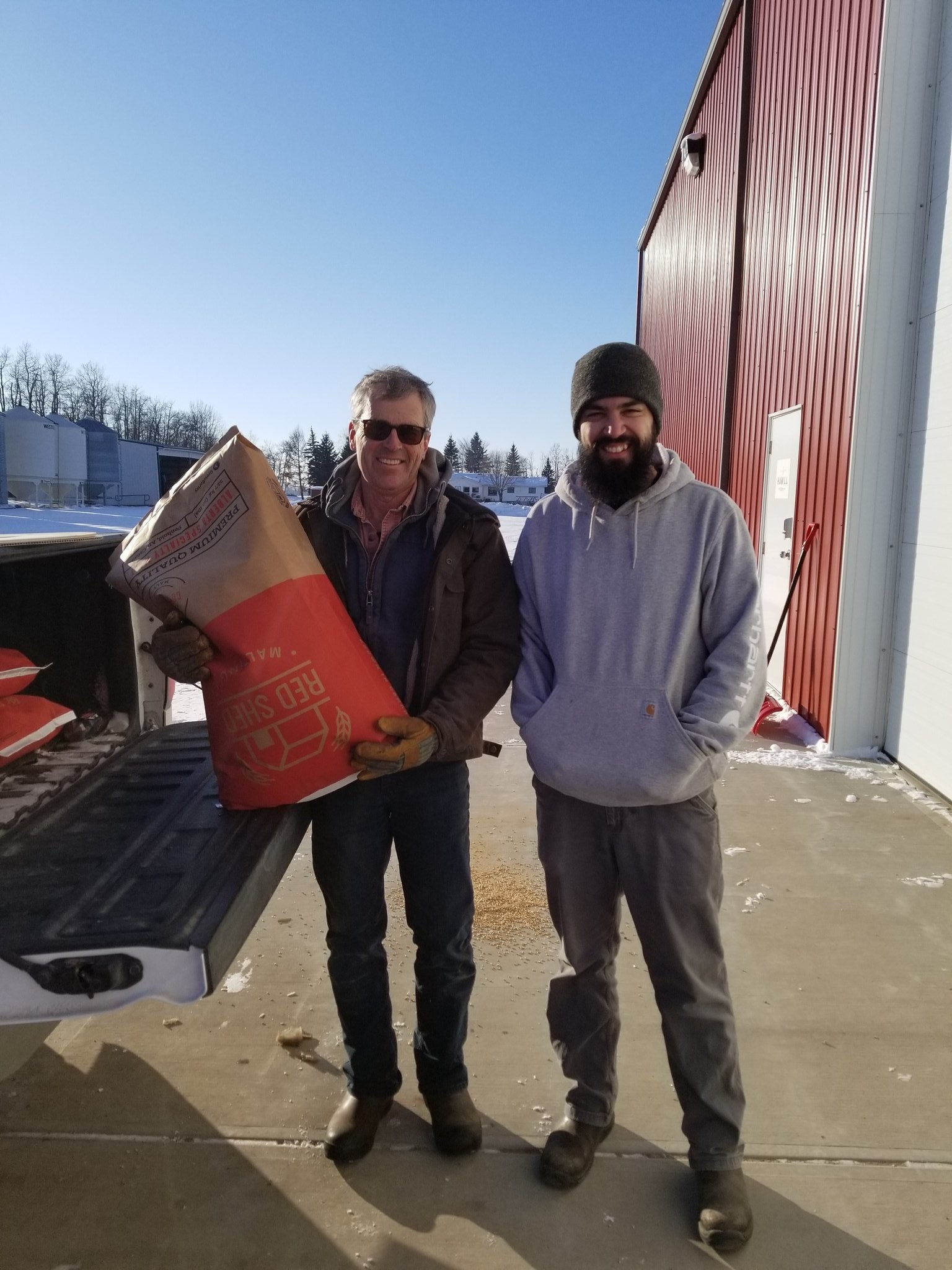 CANTERRA SEEDS has worked with numerous breweries across Western Canada to promote AAC Connect and provide sample bags for beer batches made with AAC Connect. These included CANTERRA SEEDS’ own Connect the Plots branded beer, along with numerous other labels. Local brewery partners included Red Shed Malting and Olds College in Alberta.

“Our partnerships with local craft breweries here in Alberta have allowed us to spread the word about AAC Connect, get immediate feedback on small batches and have some fun,” says Colette Prefontaine, Pedigreed Seed Territory Manager for the Western Prairies (west of Saskatoon).

Manitoba’s Farmery Estate Craft Brewery grows malt barley and has several acres of hops on its farm near Neepawa, Manitoba. The company has recently decided to make a switch regarding the malt barley varieties it sources and make AAC Connect its new go-to variety for future seasons. 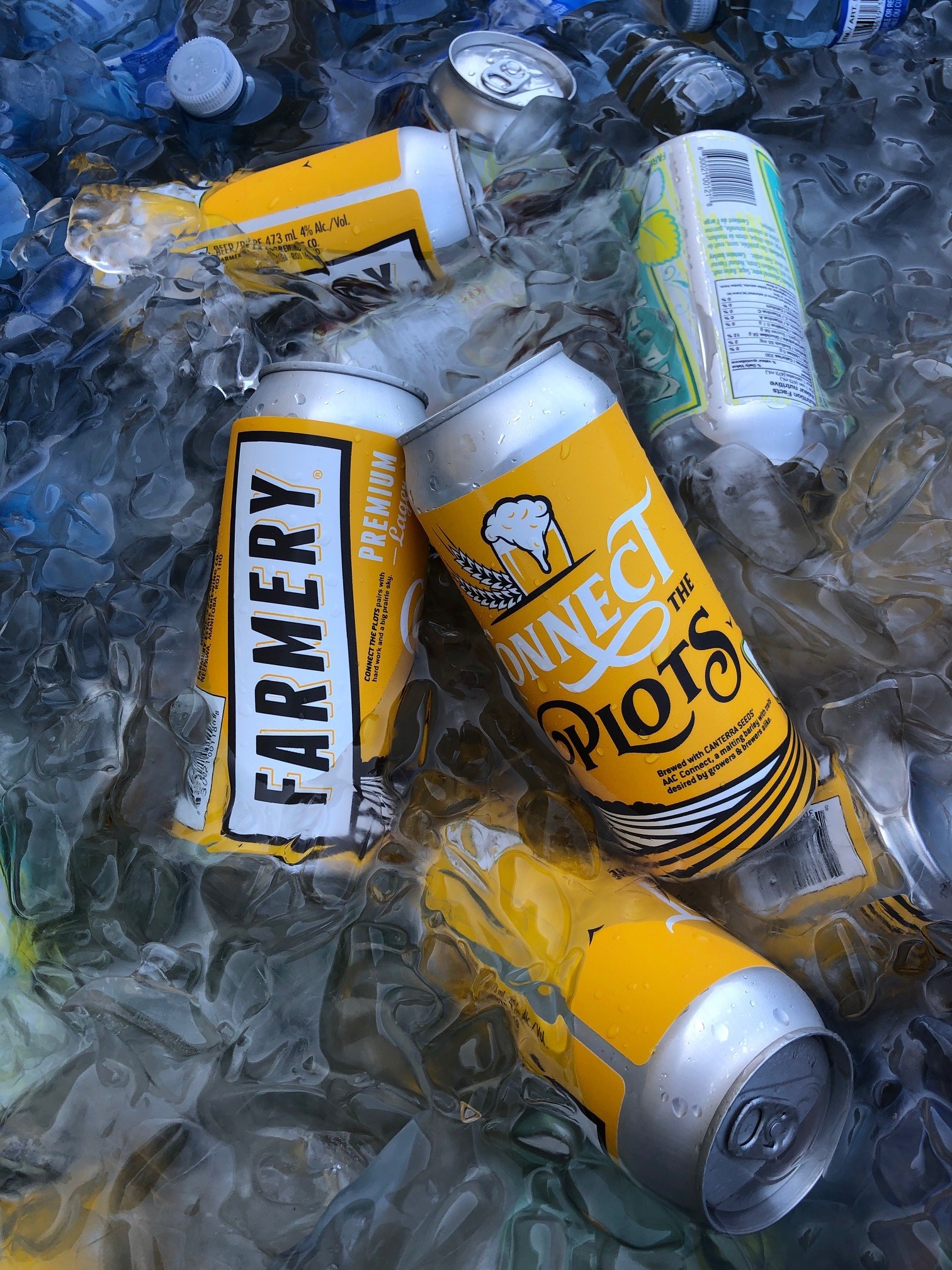 According to Lawrence Warwaruk, who co-owns Farmery with his brother, this decision was made based on the strong brewing qualities AAC Connect offers. The two grew AAC Connect for the first time this past year, and unfortunately dealt with the same excess moisture and flooding issues that affected the Neepawa area in the 2020 season.

Challenging Weather Conditions Across the Prairies

Although he says the AAC Connect they seeded in Spring 2020 got off to a good start with great emergence, ultimately the crop suffered from lack of moisture during the season and then flooding in the fall approaching harvest. While these highly unfavourable conditions led to the crop being rained out, Warwaruk is still planning to convert their acres to AAC Connect next year.

“Unfortunately, we weren’t able to see the true attributes of the variety last year,” says Warwaruk. “We had major issues last year so hopefully with some better weather we will be able to see this variety deliver what it promises. The bushel weight, plump seed, conversion rate and the disease package are exciting to us.”

Warwaruk’s story echoes from others from across Western Canada where there were a lot of high moisture events across the Prairies. CANTERRA SEEDS Pedigreed Product Development Manager, Cosmin Badea, says the variety’s performance this year was not indicative of its true potential and hopes farmers will get to see the agronomic benefits of AAC Connect in full form this season.

Badea says AAC Connect offers farmers the best level of genetic resistance to FHB currently available in the marketplace. Fusarium is a major concern for barley growers, and it is a particular concern for malting barley.

“AAC Connect has the best fusarium resistance currently on the market and low DON accumulation which means farmers can produce clean, safe grain for millers," says Badea. "This makes it a really adaptable fit for farmers across Western Canada, from Manitoba to Alberta.” 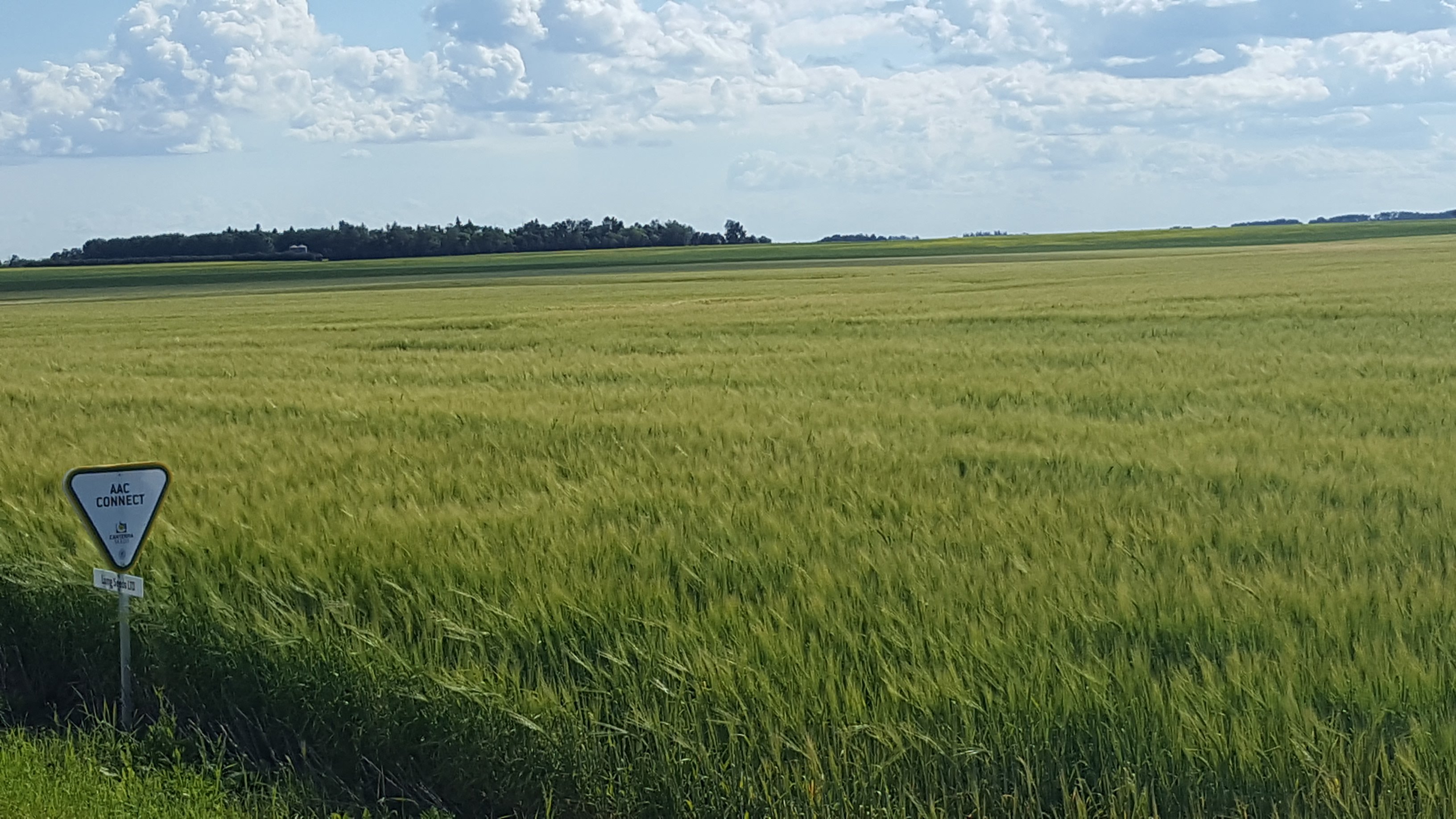 Watts says the low-DON accumulation of AAC Connect is another strong attribute of the variety from a malting perspective, as malting companies have very strict limitations on the level of DON that is allowed to be present when purchasing barley, measured in parts per million.

When grown with good management practices, Watts says AAC Connect is very promising, particularly for farmers in the eastern Prairies, Saskatchewan east of Saskatoon and in Manitoba, where fusarium is more prevalent.

In regions with shorter growing seasons like the Peace Region in Alberta, a strong selling point of AAC Connect is its maturity. AAC Connect gets a strong start out of the gate, and its maturity is equal to AC Metcalfe, whereas many varieties like CDC Copeland are a day or two later.

According to Badea, another positive seed quality attribute of plump grain is that it makes it easier for farmers to safely store their grain. Flatter grain tends to pack, and then you are more susceptible to fungus and diseases that can form in the bin. Keep it Clean has additional information about storage for cereal crops and how crop storage can affect marketing opportunities.

“AAC Connect’s plump kernels behave like marbles in a jar, leaving lots of room for aeration in storage,” says Badea.

Brent Derkatch, CANTERRA SEEDS’ Director, Pedigreed Seeds Business Unit, says he is proud of the way CANTERRA SEEDS staff and strategic partners have promoted the variety in the marketplace and the growth and momentum AAC Connect is experiencing.

Derkatch says the vast majority of acres to date have been focused on contracting programs with domestic malting companies. In addition, there has been increased interest from some of the major line companies in the variety where their focus is partly to support domestic maltsters, primarily focused on the export demand side of things. As Peter Watts mentioned earlier, through the CMBTC over the last two or three years, with support from the barley value chain, sample containers of barley have been shipped to international malting companies including in China.

“The variety is now gaining key acceptance with some of the largest malting companies in China as an accepted variety for their requirements,” says Derkatch.

Another critical milestone that we achieved in Winter 2019 was that the variety was also added to be the American Barley Association recommended list, as we have also seen increased demand into the U.S. side. Through our sister company, Meridian Seeds, we facilitated the seed exports into the U.S. as part of certain contracting programs.

“We knew from the onset that this variety had this level of potential, but we also know that the malting barley industry doesn't change varieties very fast,” says Derkatch. If anything, he says the Canadian malting barley industry tends to hang onto its favoured varieties for a long time relative to other countries that we compete against in the world, making AAC Connect’s progress all the more significant.

“People have to take chances along the way to help support market development. Many varieties have shown promise like this, and yet they have come and gone because they never gained this degree of momentum,” says Derkatch. “So, it has been a lot of heavy lifting from a lot of people, but it has been very rewarding, too.”

As well, I and my fellow Territory Managers at CANTERRA SEEDS are committed to supporting our seed growers and retail partners on this variety and to deliver the best in barley seed to Western Canadian farmers.

Get What You Want from Malting Barley with AAC Connect

Does AAC Connect have what you want in a malting barley variety? Don’t just take our word for it; if you haven’t tried AAC Connect before, experience the disease resistance and market demand opportunities for yourself.

Contact me, Rick Love, or Colette Prefontaine today to ask us more about growing AAC Connect in your area. If you’re ready to buy AAC Connect, contact your local CANTERRA SEEDS Seed Grower for more information on malt barley prices per tonne and book your seed for Spring 2021. 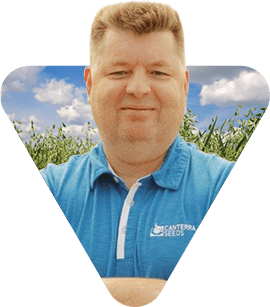 Rick Love is CANTERRA SEEDS' Pedigreed Seed Business Manager. Originally from northeast Saskatchewan and a graduate of the University of Saskatchewan, Rick has spent his entire career in the seed industry. Over a span of 35 years he has worked with plant breeders and seed growers to introduce over 100 improved varieties of cereals, pulse & special crops, oilseeds, forage legumes and grasses to farmers and ranchers in Western Canada. Rick has served on technical committees with Canadian Seed Growers Association, Canadian Seed Institute and Crop Life Canada.