There are several things to consider when deciding on the right canola variety for your farm. Some place higher priority on shatter tolerance whereas others look more closely at disease resistance, or herbicide tolerance, or contract premium options. The decisive factor for most is what trait, or combination thereof, will allow them to reach their yield aspirations and ultimately give them the best return on investment. Here are some things to consider when looking at each of these variety characteristics:

A great new innovation in canola breeding that allows growers to delay swath or straight-cut, giving them a new type of flexibility at harvest. Cutting the crop later can prolong development which can lead to higher yield, protein and oil content. One of the drawbacks is considering uneven dry-down and/or maturity, especially if one needs to get the crop off sooner than expected. Circumstances may not always favour having to wait until 100% seed colour change to straight-cut.

Where some hybrids are strong for pod shatter tolerance, they may be weaker in disease resistance – particularly blackleg. One needs to carefully weigh the trade-off between the two – am I going to lose more to shatter or blackleg? Recent studies have shown that even low levels of infection of blackleg can cause yield losses of up to 20%. Will a shatter-tolerant hybrid preserve comparable levels of yield? Perhaps – but to be sure, a good approach is to look at hybrids that can be both straight-cut and have solid blackleg resistance, such as CS2100. This hybrid has become a popular straight-cut variety with the broadest level of protection against blackleg currently available, possessing three major genes of resistance (R-ACG). Take a close look at the blackleg label before purchasing your next pod-shatter tolerant variety. 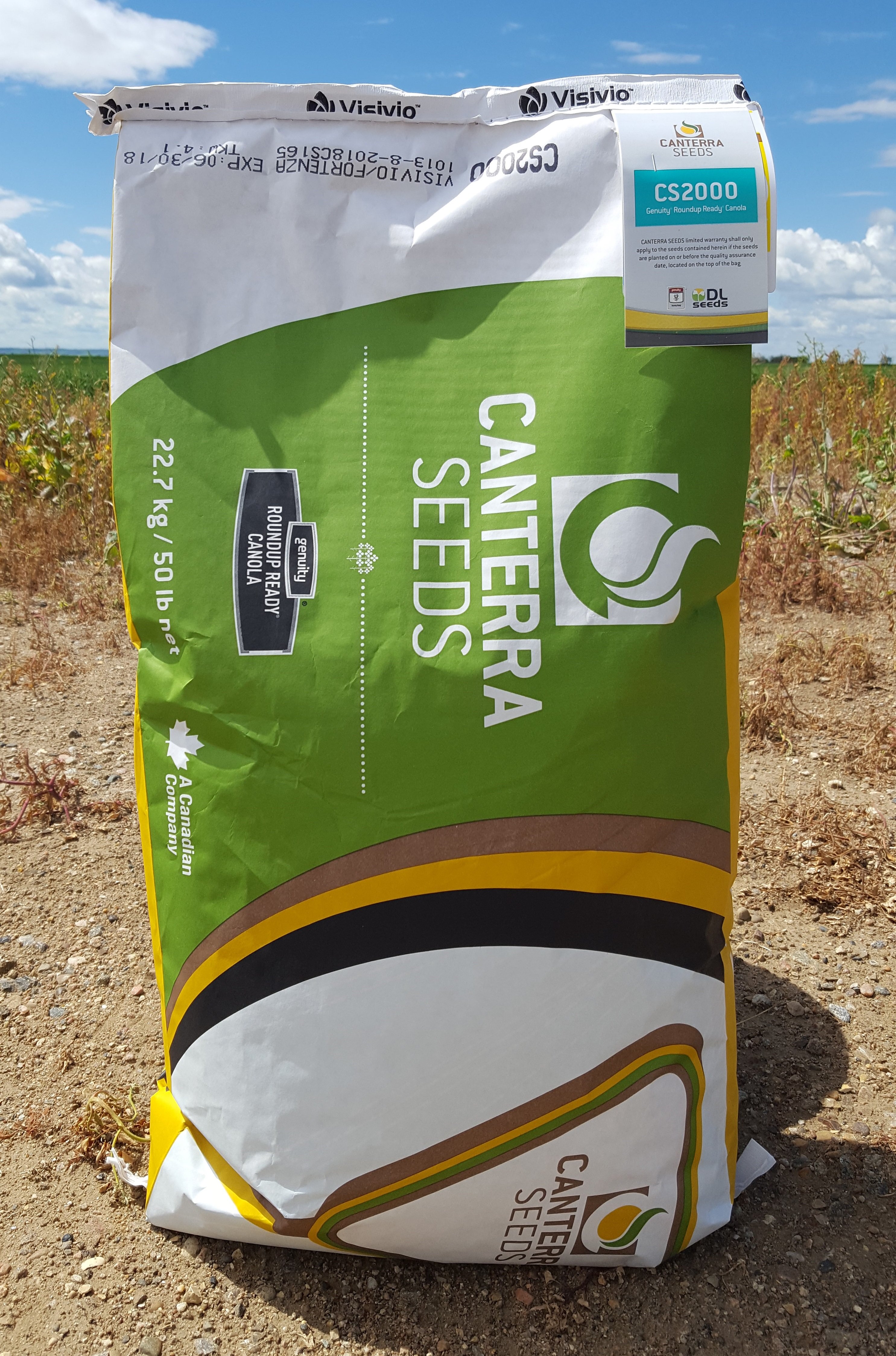 Up until CS2000, there was very little if anything in the way of differential clubroot resistant sources. Now as we begin to see different sources of resistance becoming commercially available, growers, particularly in the clubroot zone, have more options with which they can rotate to help better manage the disease. This is good news in the fight against clubroot because we can finally reduce our dependence on the same source that can exacerbate the ‘breakdown’ of genetic resistance. CANTERRA SEEDS is at the forefront of delivering the most diverse set of disease resistant genes – both for clubroot and blackleg. In some cases, you can have it both ways. With a variety like CS2000, you’re getting an enhanced clubroot and blackleg package (R-CE1) that will further enhance the yield potential of the crop.

In certain regions, variety selection is driven primarily by herbicide tolerance. For example, concern over glyphosate-resistant weeds along with volunteer canola has led many to opt for LibertyLink® canola rather than Roundup Ready® canola.  The belief is this is the best way to stave off glyphosate-resistant weeds and control volunteer canola. While going with LibertyLink canola is certainly an option, the research tells us that it is actually tank-mixing that is more effective at delaying herbicide resistance than rotating trait systems (i.e. the idea of using LibertyLink one year and Roundup Ready the next). By tank-mixing, one can grow Roundup Ready canola sustainably, get better weed control, and arguably get better returns through reduced input costs (i.e. consider the cost of glyphosate vs. glufosinate ammonium; also take a close look at seed cost). This assumes comparable yields between the two systems – ample data exists that shows CANTERRA SEEDS’ Roundup Ready canola is on par if not better than LibertyLink canola. There is also a new trait innovation for glyphosate tolerant canola – TruFlex™ canola with Roundup Ready® Technology. The TruFlex canola system is now available, which provides growers a wider window of spray application (up until first flower, which translates into ~10-14 days additional spray days) and the option to use a higher rate of glyphosate that further enhances weed control and ultimately yield. 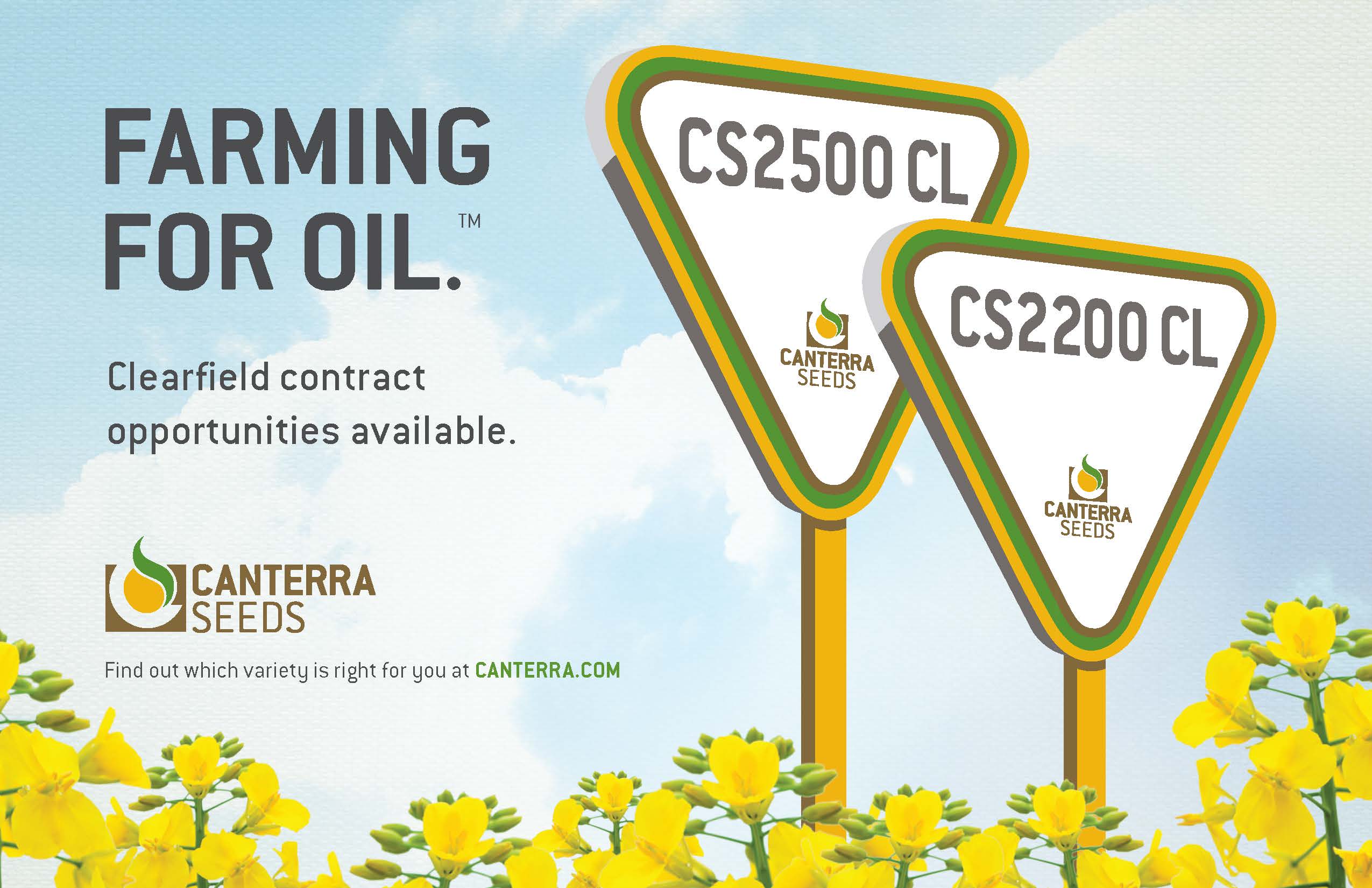 Premiums on commodity Clearfield® canola is relatively new. CANTERRA SEEDS is pleased to have its Clearfield hybrids CS2500CL and CS2200CL on both the Viterra and Bunge crush programs. Clearfield genetics have come a long way in recent years. Our key breeding partner DL Seeds has now closed the yield gap with other trait systems. With CANTERRA SEEDS’ Clearfield hybrid yield being close (if not on par) with genetics from other trait systems, there is some serious value to consider when you look at the lower seed cost of Clearfield vs Roundup Ready/LibertyLink. Including the crush premiums now being offered on top of it all – Clearfield canola starts to look pretty good. One concern that is sometimes raised about growing Clearfield canola is kochia control. With kochia being group-2 herbicide resistant, it can pose a problem, however various control measures do exist. As we know, kochia is an early germinator and so a good time to manage it is at the pre-seed burndown stage with a product like Conquer® (group 6 & 14). As we also know, kochia tends to be a poor competitor and so if one can get a good pre-seed burndown, there’s a good chance that the canola crop will get a jump on the kochia and won’t pose a problem in-season. Yes, there’ll probably be some escapes and later flushes of the weed but that’s where the grower needs to make a decision – does the potential return I get with good yields, lower seed cost and crush premium with CS2500CL or CS2200CL make it worthwhile to deal with a bit of kochia?

As every canola grower knows, a lot goes in to selecting the right canola hybrid. This is because there is no perfect variety – at least not yet! Making the right variety choice can take time but when looking at the overall return potential of the different options for your situation, it’s definitely time well spent.