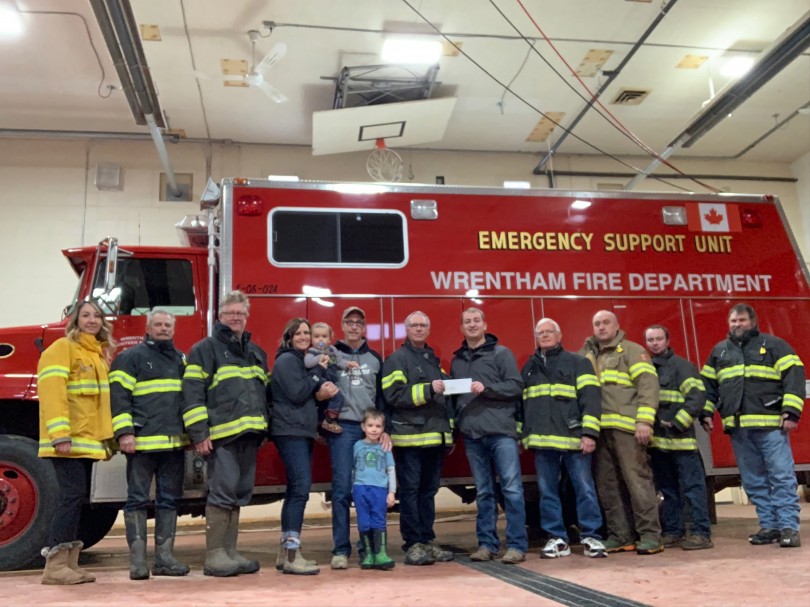 The fire department, which is made up of a small team of local volunteers — mostly farmers — responds to area 911 calls and deals with traffic and farm accidents, fires and other urgent situations. In the summer of 2020, they responded to an emergency on Eliason Farms.

“Our son Harry was unconscious and vomiting on the kitchen floor. My first thought was heat stroke, since it was 30 degrees outside and he had been playing with the dog,” Eliason says. “The Wrentham Fire Department was there within minutes and while we were on the way to the hospital, they helped determine that Harry had been bitten by a rattlesnake. We owe them everything.”

The $5,000 donation will go toward helping maintain and replace fire and rescue equipment, such as oxygen tanks, as well as annual recertifications and ongoing training.

Eliason knows that his contribution is just a drop in the bucket for the Wrentham Volunteer Fire Department’s needs, but it’s an organization he’s happy to support.

“Without the folks at these tiny organizations, there would be giant holes in our rural communities. They are the fabric that knits our community together and keeps us safe,” says Eliason. “We’re forever grateful that people volunteer their most valuable asset — their time — to keep things running. We’ll continue to support this organization every year.”

Winners from the Rooted in the Prairies Project have been featured over the past several weeks on the CANTERRA SEEDS Behind the Seeds blog at canterra.com/blog. For more information about our silver anniversary celebration and company history, visit canterra.com/roots.