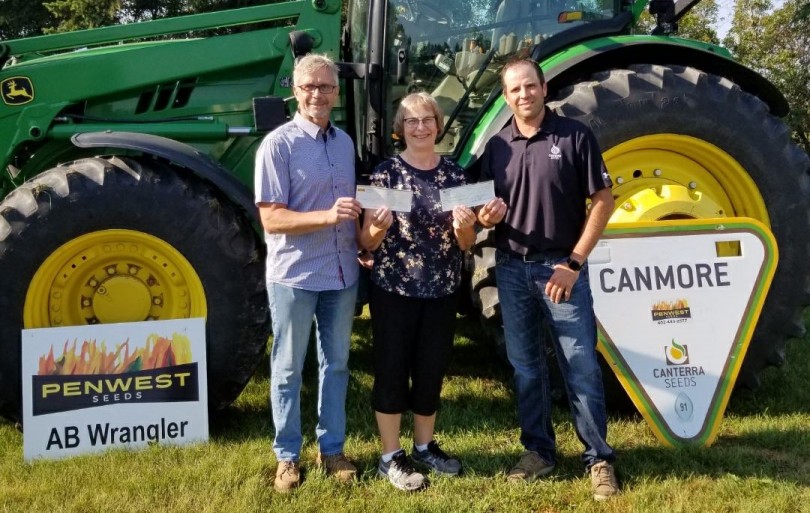 To celebrate 25 years in the seed business, CANTERRA SEEDS partnered with their seed growers to give back to their communities, as a thank you for supporting the company for a quarter century. The Rooted in the Prairies Project, launched in March 2021, saw ten $2,500 donations given to local causes throughout Western Canada by nominations gathered from CANTERRA SEEDS seed growers and Western Canadian farmers. CANTERRA SEEDS is excited to announce the winner for the Central Alberta region – Larry Penner.

Larry Penner of Penwest Seeds and his family have farmed in the Three Hills, Alberta area for over 30 years. They’ve been CANTERRA SEEDS shareholders for over six years, continually demonstrating to the company that they have the same engaged commitment to CANTERRA SEEDS as they do in their community.

Larry nominated the Three Hills Health Care Auxiliary Society for the Rooted in the Prairies Project – a cause that is important to him. “Having lived all my life here, I know the impact the Auxiliary Society has had on health care for this community,” Larry explained. “The volunteers provide extension services and equipment that are not easily replicated. I see what they do and I want to ensure they can keep doing it.”

In addition to the $2,500 donation provided by the Penner family on behalf of CANTERRA SEEDS, Larry has matched the donation, for a total of $5,000 going to the Auxiliary Society.

Edna Stankievech, treasurer for the Three Hills Health Care Auxiliary Society, shared they were very grateful for the donation and are excited for how much more it will allow them to do.

“In the fall, we’ll be in touch with the Three Hills Health Care Centre to find out their most current needs,” Edna says. “Then we purchase what we can from their wish list. We’ve purchased items such as an oxygen concentrator, a handheld ultrasound machine, blood pressure machines and lift chairs for long-term care. The list goes on.”

CANTERRA SEEDS is proud to support this initiative in Central Alberta, where it will certainly help the rural and farming communities around Three Hills. All winners from the Rooted in the Prairies Project will be featured in coming weeks on CANTERRA SEEDS’ Behind the Seeds blog at canterra.com/blog. For more information about our silver anniversary celebration and company history, visit canterra.com/roots.